The good people at Wired released a eye opening video about how hackers have figured out how to abuse a vulnerability in many modern automobiles that lets them take complete control remotely (kill the gas, turn on the radio, shut off the breaks, etc.). I posted about this concept last year HERE however back then, the hackers had to access the car. This time they are abusing a vulnerability in the UConnect system meaning they don’t need any device plugged in or physical modification to make this work.

They will be talking about this next month at the Blackhat Defcon events so for those that are going, make sure to check it out. Below is the post and video. The original wired post can be found HERE. I’m not buying a new car after watching this. I’m thinking maybe getting a classic instead …. with no wireless technology.

STORY FROM WIRED: I WAS DRIVING 70 mph on the edge of downtown St. Louis when the exploit began to take hold.

Though I hadn’t touched the dashboard, the vents in the Jeep Cherokee started blasting cold air at the maximum setting, chilling the sweat on my back through the in-seat climate control system. Next the radio switched to the local hip hop station and began blaring Skee-lo at full volume. I spun the control knob left and hit the power button, to no avail. Then the windshield wipers turned on, and wiper fluid blurred the glass.

As I tried to cope with all this, a picture of the two hackers performing these stunts appeared on the car’s digital display: Charlie Miller and Chris Valasek, wearing their trademark track suits. A nice touch, I thought.

The Jeep’s strange behavior wasn’t entirely unexpected. I’d come to St. Louis to be Miller and Valasek’s digital crash-test dummy, a willing subject on whom they could test the car-hacking research they’d been doing over the past year. The result of their work was a hacking technique—what the security industry calls a zero-day exploit—that can target Jeep Cherokees and give the attacker wireless control, via the Internet, to any of thousands of vehicles. Their code is an automaker’s nightmare: software that lets hackers send commands through the Jeep’s entertainment system to its dashboard functions, steering, brakes, and transmission, all from a laptop that may be across the country.

To better simulate the experience of driving a vehicle while it’s being hijacked by an invisible, virtual force, Miller and Valasek refused to tell me ahead of time what kinds of attacks they planned to launch from Miller’s laptop in his house 10 miles west. Instead, they merely assured me that they wouldn’t do anything life-threatening. Then they told me to drive the Jeep onto the highway. “Remember, Andy,” Miller had said through my iPhone’s speaker just before I pulled onto the Interstate 64 on-ramp, “no matter what happens, don’t panic.”1 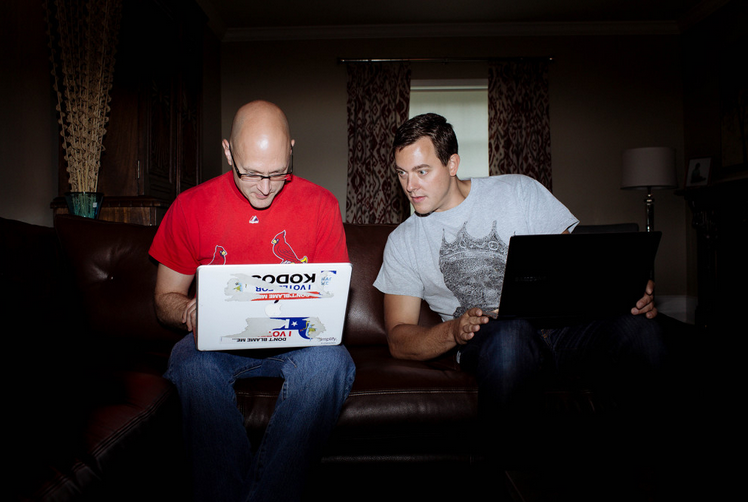 Charlie Miller (left) and Chris Valasek hacking into a Jeep Cherokee from Miller’s basement as I drove the SUV on a highway ten miles away. WHITNEY CURTIS FOR WIRED

As the two hackers remotely toyed with the air-conditioning, radio, and windshield wipers, I mentally congratulated myself on my courage under pressure. That’s when they cut the transmission.

Immediately my accelerator stopped working. As I frantically pressed the pedal and watched the RPMs climb, the Jeep lost half its speed, then slowed to a crawl. This occurred just as I reached a long overpass, with no shoulder to offer an escape. The experiment had ceased to be fun.

At that point, the interstate began to slope upward, so the Jeep lost more momentum and barely crept forward. Cars lined up behind my bumper before passing me, honking. I could see an 18-wheeler approaching in my rearview mirror. I hoped its driver saw me, too, and could tell I was paralyzed on the highway.

“You’re doomed!” Valasek shouted, but I couldn’t make out his heckling over the blast of the radio, now pumping Kanye West. The semi loomed in the mirror, bearing down on my immobilized Jeep.

What is the Wall Of Sheep at DEF CON? – My Experience as a speaker, volunteer and DJ