The Conversation.com wrote a interesting post on how you can use the chemical components of soft drinks to hide messages. The original post can be found HERE.

Next time you see someone spilling a drink in a bar, you could actually be witnessing a spy secretly decoding an encrypted message. This might sound like something from a Bond movie. But a team from Israel has used some rather niffy chemistry to come up with a way to use common chemicals such as cola as the encryption key to code and decode hidden messages.

Spies have long tried to make coded or encrypted messages even more secure by hiding them in something seemingly innocuous, from the secret wax writing tablet devised by Demaratus, King of Sparta, to the “lemon juice spies” of World War I. This practice is known as steganography.

In the case of lemon juice invisible ink, the chemistry is quite simple. Write the message in juice and when it dries the text disappears. But if you heat it up, the acids from the lemon react with the sugars to caramelise them, turning them brown. And, hey presto, the message is revealed.

The Israeli team of researchers from the Weizmann Institute of Science have continued this tradition with some chemistry that is ingenious enough for any spy movie. Their method, published in the journal Nature Communications, is complex to devise but simple to use, and combines encryption, steganography and password protection.

It all rests on fluorescent molecules that can be made to give off different wavelengths of light when they come into contact with certain chemicals. Measuring the wavelengths gives you a code that you then need to decrypt to read the message. The scientists built the molecules that contain the code in their lab but the chemicals could be familiar products such as a particular cola, instant coffee or mouthwash.

To encode the message, you use a simple cipher, where each letter is replaced with another symbol, or in this case with a set of numbers. So if your message was “open sesame”, to encode the word “open” you could use:

You also assign a wavelength of light (measured in nanometers, nm) to each letter.

You then put the molecule in your chosen chemical, for example cola, and measure the amount of light that it gives off at each wavelength. (This can be done with a simple and cheap hand-held device, although 007 would probably have the function built into his watch.)

Fluorescence is measured with arbitrary units, so to get the same numbers for both the coding and decoding instruments they must be set up the same way, which actually adds another layer of security. Adding the value of this measurement to the cipher numbers gives you your final code. So if you measure 689 at 500nm, you add this number to 4350, giving a final value of 5039 for the letter O. 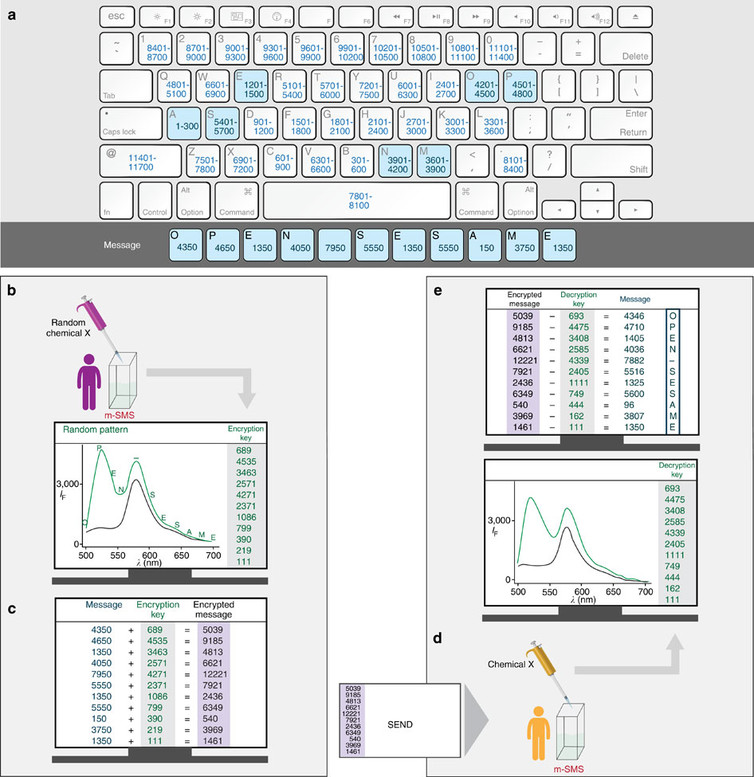 Finally, you transmit the numbers and the fluorescent molecule to whomever you want to read your message. The molecule could be concealed by drying it onto a letter, for example. All the recipient would need to do is place the letter in the correct brand of cola and measure the light released to decode the message. The encryption is specific to the chemical you’ve used to create it. So if you tried to decode the message using mouthwash rather than cola, you’d get the wrong values and the resulting letters wouldn’t make any sense.

The Israeli team have also included a neat way to password-protect the message by making the light given off by the molecule dependent on the order in which you add other chemicals to it. So you can get a different encryption key by adding mouthwash then cola rather than the other way round.

The whole system may seem rather complex, but the research team have tested it with untrained volunteers and shown that with a few minutes instruction it is really quite easy to use.

So look a bit closer next time you notice someone spill their coffee on some papers (especially if they have a high tech watch on) … they might just be decoding a secret message.