We are done! Aamir Lakhani (www.DrChaos.com) and I have finished our book “Web Penetration Testing with Kali Linux”.

You can pre-order the book from Packt Publishing’s website at:

Kali Linux is built for professional penetration testing and security auditing. It is the next-generation of BackTrack, the most popular open-source penetration toolkit in the world. Readers will learn how to think like real attackers, exploit systems, and expose vulnerabilities.

Even though web applications are developed in a very secure environment and have an intrusion detection system and firewall in place to detect and prevent any malicious activity, open ports are a prerequisite for conducting online business. These ports serve as an open door for attackers to attack these applications. As a result, penetration testing becomes essential to test the integrity of web-applications. Web Penetration Testing with Kali Linux is a hands-on guide that will give you step-by-step methods on finding vulnerabilities and exploiting web applications.

It took many hours over the course of a few months to finish this book, but we believe we have something unique and different than other security books. Aamir and I both tried to bring in real world experience we have with over over 20 years of combined consulting. This not only includes the technical aspects of penetration testing, but also how to sell and scope a penetration test and how to write a final report and deliverable.

This book would not have been possible without quite a number of people. I would specifically like to call out Dan Catalano from World Wide Technology for designing an awesome book cover. Dan, thank you for your hard work! 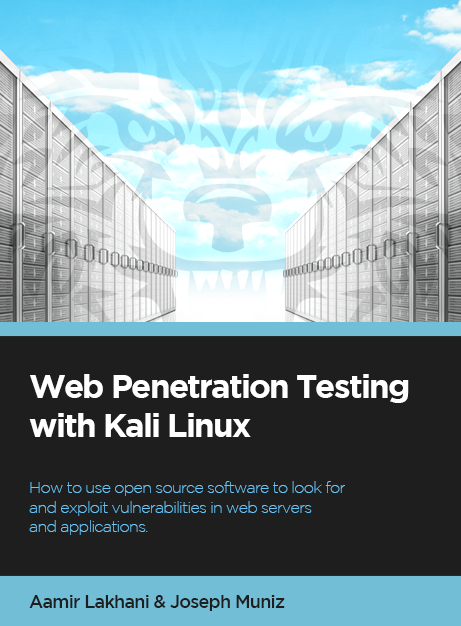 You can see based on the publisher’s guidelines we had to change the book cover slightly, but I was such a big fan of the Dan’s original concept I had to share it. They may change it back to blue prior to hitting the press but for now its orange.

We also had a few excellent technical reviewers. I would like to personally thank my buddy Brian Sak from Cisco Systems for all his hard work that he put into helping us be a technical reviewer. Thank you again!

Lastly, the book would not be possible without all the support we both got from our family, friends, colleagues, and employers. We hope we made you proud of the work!