Anonymous posted a warning video to Denver regarding its recent homeless camp cleanup law. Anonymous pointed out many reasons why this new law is a violation of human rights and states they would prefer a peaceful resolution. However, they claim “Expect Us”, so most likely actions will be taken against Denver officials if nothing is done about this threat. This post contains the Anonymous video and cbs article on this topic found HERE.

DENVER (CBS4) – Around 50 people gathered at Denver’s City and County Building on Monday to protest cleanup sweeps involving the homeless population. They carried signs and chanted “stop the sweeps.”

The cleanup operations have taken place outside shelters centered at Lawrence Street and Broadway in what’s become known as the Ballpark neighborhood. Two weeks ago makeshift camps lined the sidewalks with people living under tarps. CBS4’s Rick Sallinger visited with four people living inside one of them.

“I could live like this for the rest of my life and be happy,” a man named Van 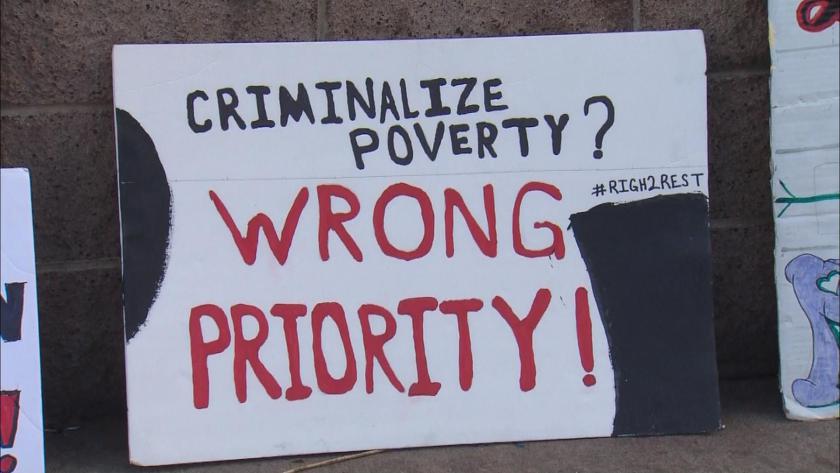 But warning signs were posted by the city to move or be moved. The following day cleanup crews surrounded the camp with police protection and carried out what had been promised. Items were bagged up for retrieval or tossed out on garbage trucks. The homeless who had stuck around moved out.

Now comes a backlash via the Internet posted on YouTube and elsewhere under the name of a group calling itself Anonymous.

“Greetings city of Denver, we are Anonymous. It has come to our attention that you continue to deny the homeless of your city their basic human rights,” the person with a mask and computerized voice said.

The notorious hacker group claimed to have already interfered with the Downtown Denver Partnership’s website. That business group would not comment. The video posted opposed Denver’s law against camping in the city.

“Consider yourself warned. You will immediately place a moratorium on enforcement of the camping ban,” the Anonymous speaker says in the video. “You will in good faith return possessions confiscated to their owners. You provide an open space to set up a temporary camp while a permanent solution is found.”

Threats were made to post private information of city and business leaders if the demands were not met.

The city has released a public response saying it is attempting to help the people that were moved by finding them an alternative place to live, helping them with mental health issues, and with other problems that may have occurred as a result of the sweeps