Violet Blue wrote a great article on ZDnet about the recent Anonymous events. In summary, after racial hate group Ku Klux Klan said it would use ‘lethal force’ on Ferguson protesters, a skirmish with Anonymous erupted: Anonymous has now seized two primary KKK Twitter accounts. You can find the original post HERE.

At 6:31pm PST Anonymous said it has knocked the website belonging to “Traditionalist American Knights of the Ku Klux Klan” — the group responsible for the Ferguson threats — offline.

ZDNet has also received an unconfirmed statement that Anonymous has compromised KKK member email accounts, and a phone harassment campaign is being conducted on KKK members. The message is in full at the end of this article.

@KuKluxKlanUSA is currently under the control of Anonymous after a week of mutual threats sparked by the KKK’s announcement to use “lethal force” against Ferguson protesters.

Through the account, Anonymous tweeted that it will release a Monday evening statement about the takeover.

“The Riverfront Times reported that the St. Louis, Missouri KKK group passed out pamphlets starting, “Attention: To the terrorists masquerading as “peaceful protesters”!”

The announcement stated further, “We will use lethal force as provided under Missouri law to defend ourselves.”

KKK leader Frank Ancona went on MCNBC Wednesday to back up the threat and claim support from Ferguson locals; the head of Missouri’s KKK told media that his organization’s threats to protesters had boosted KKK recruitment.

The Missouri group behind the threats — Traditionalist American Knights of the Ku Klux Klan — is listed as an active hate group by the Southern Poverty Law Center. 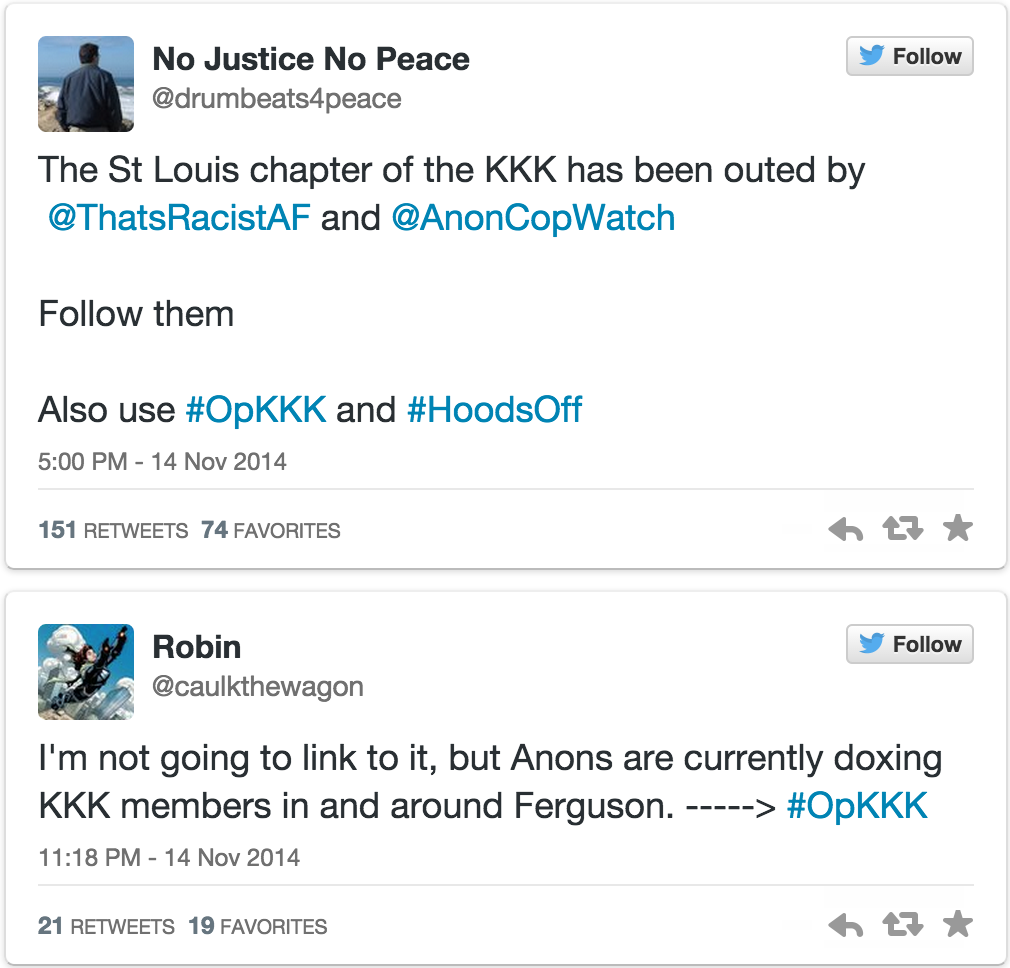 Anonymous Australia released a video Friday announcing a campaign of cyberwar against the racist organization. It was removed Monday and replaced instantly

Transcript of the video reads,

KKK Twitter accounts insulted and mocked Anonymous on the microblogging site until Sunday evening when Anonymous declared a victory in the form of snatching the account of @KuKluxKlanUSA. 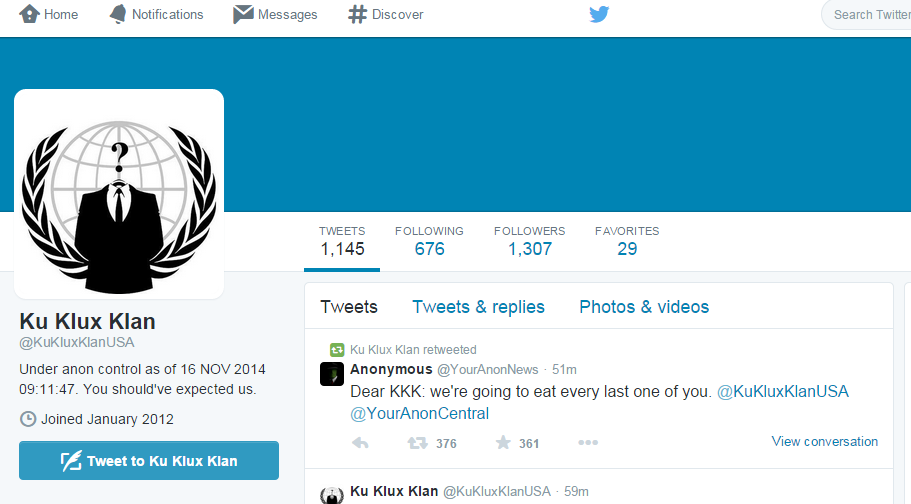 The #OpKKK hashtag is beginning to move quickly on Twitter, and in it there appears to be little sympathy for the KKK.

The grand jury investigation into the August 9 shooting of 18-year-old Michael Brown and Ferguson police officer Darren Wilson is expected to return a verdict in the next few days.

According to the New York Times, protesters are already preparing for the decision.

UPDATE November 16: This post has been updated to add a second Twitter account takeover by Anonymous (@YourKKKCentral) and a website attack on the KKK, as well as ZDNet having received the following unconfirmed message two hours after this article’s publication:

Also…. we have compromised personal accounts (which give us more faces), tied up their phone lines and filled every voicemail and inbox with love. We have barely scratched the surface, keep that pencil out….