Theguardian.com posted about how Anonymous plans to release a bunch of KKK members. The original post can be found HERE.

The “hacktivist” collective Anonymous have vowed to release the names of “about 1,000” Ku Klux Klan members as part of an ongoing operation against the white supremacist group in the US.

Operation KKK’s Twitter account said that the name-dump will coincide with the one-year anniversary of the beginning of the group’s cyber-war with the Klan following a grand jury’s decision not to indict officer Darren Wilson for the death of Michael Brown in Ferguson, Missouri.

In November 2014, a local Missouri chapter of the KKK distributed fliers threatening violence against activists. The fliers warned protesters in Ferguson that they had “awakened a sleeping giant”.

In response, Anonymous declared war on the white supremacy group. They took over the KKK’s Twitter account and replaced its logo with their own – the account remains under Anonymous’ control to this day – and hit Klan-affiliated sites with DDoS (distributed denial of service) attacks. They also released the names of a number of KKK members.
Advertisement

A press release posted online on Tuesday said: “After closely observing so many of you for so very long, we feel confident that applying transparency to your organizational cells is the right, just, appropriate and only course of action.”

“You made a clear and ever present enemy of Anonymous when you threatened the lives of protesters and the men and women representing Anonymous on the ground in Ferguson, Missouri in November of 2014,” the release said. “You continue to make threats to anons you believe you have identified, journalists, anyone in the public that speaks out against your behavior. Your threats and intimidation are unprovoked, unwanted and will not be tolerated.”

Anonymous is a disparate and amorphous group of hackers and online activists which originated on the anarchic message-board 4chan around 2003. Its name comes from the “anonymous” tag that posters on 4chan get; users of the site, as well as members of the group, both refer to themselves as “anons”.

Anonymous, which operates as a grassroots-style organisation with no visible leadership or membership structure, has chosen a disparate group of targets since its inception roughly 12 years ago. Its first high-profile operation, known as Project Chanology, targeted the Church of Scientology.

It has targeted child pornography rings and the Westboro Baptist church, and attacked PayPal when it withdrew support from WikiLeaks (for which two hackers were later imprisoned and a third given a suspended sentence.)

The practice of revealing someone’s identity online is known colloquially as “doxxing”. It is usually considered anathema to the culture of Anonymous; but they appear to have made an exception to this rule when it comes to lifting the hoods of Klan members. 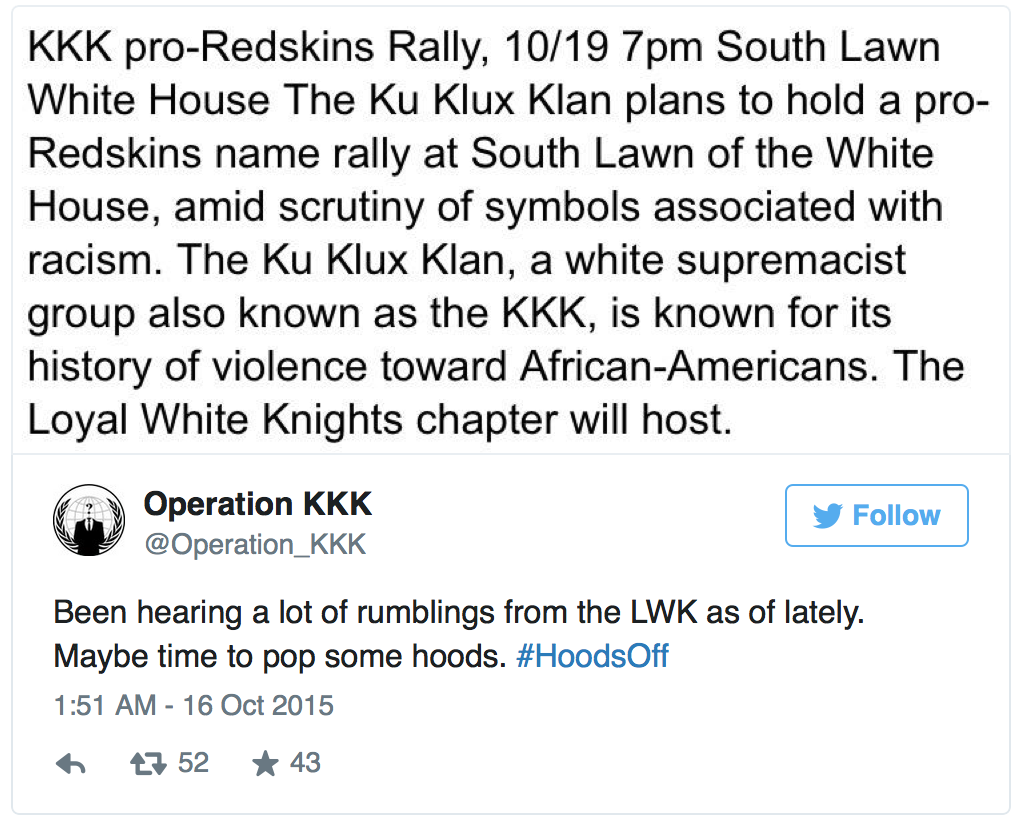 Founded after the civil war, the Ku Klux Klan is considered America’s oldest hate group by the Southern Poverty Law Center (SPLC). At its height in the 1920s it had as many as four million members; today its membership is estimated at between 5,000 and 8,000.

“Ku Klux Klan, We never stopped watching you,” Anonymous said in Tuesday’s release. “We know who you are.”

“We never said we would only strike once,” it continued.