Imagine your are watching your favorite tv show and start chatting about sensitive subjects. Those things could be leaked through your TV according Samsung’s warning about users of their smart TVs. Thats right, the TV that suppose to be providing entertainment is also listening for commands … BUT ALWAYS LISTENING. And anything said could be sent to a third party (whose identity isn’t public) for evaluation. What about our cleared citizens? Are they suppose to be not be permitted smart TVs at home (no smart TVs in the white house)? What if you have sex or if there is a legal alteration near the TV. Can that be used in court or end up on the web? These are questions we all should be asking regarding our privacy rights with this technology. BTW this isn’t the first time voice activated technology has been used. Think about gaming systems, mobile devices, alarms, etc.

BBC News posted an article on Samsung’s warning HERE and a general warning about this technology HERE. Below is the Samsung article. 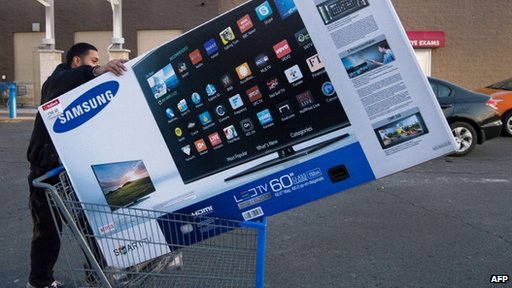 Samsung is warning customers to avoid discussing personal information in front of their smart television set.

Such TV sets “listen” to every conversation held in front of them and may share any details they hear with Samsung or third parties, it said.

Privacy campaigners said the technology smacked of the telescreens, in George Orwell’s 1984, which spied on citizens.

The warning came to light via a story in online news magazine the Daily Beast which published an excerpt of a section of Samsung’s privacy policy for its net-connected Smart TV sets.

The policy explains that the TV set will be listening to people in the same room to try to spot when commands are issued. It goes on to warn: “If your spoken words include personal or other sensitive information, that information will be among the data captured and transmitted to a third party.”

Corynne McSherry, an intellectual property lawyer for the Electronic Frontier Foundation (EFF) which campaigns on digital rights issues, told the Daily Beast that the third party was probably the company providing speech-to-text conversion for Samsung.

She added: “If I were the customer, I might like to know who that third party was, and I’d definitely like to know whether my words were being transmitted in a secure form.”

Soon after, an activist for the EFF circulated the policy statement on Twitter comparing it to George Orwell’s description of the telescreens in his novel 1984 that listen to what people say in their homes.

In response to the widespread sharing of its policy statement, Samsung has issued a statement to clarify how voice activation works.

It said the privacy policy was an attempt to be transparent with owners in order to help them make informed choices about whether to use some features on its Smart TV sets, adding that it took consumer privacy “very seriously”.

Samsung said: “If a consumer consents and uses the voice recognition feature, voice data is provided to a third party during a requested voice command search. At that time, the voice data is sent to a server, which searches for the requested content then returns the desired content to the TV.”

It added that it did not retain voice data or sell the audio being captured. Smart-TV owners would always know if voice activation was turned on because a microphone icon would be visible on the screen, it said.

The third-party handling the translation from speech to text has not been named.

Samsung is not the first maker of a smart, net-connected TV to run into problems with the data the set collects. In late 2013, a UK IT consultant found his LG TV was gathering information about his viewing habits.

Publicity about the issue led LG to create a software update which ensured data collection was turned off for those who did not want to share information.