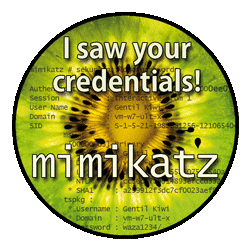 I have had requests about understanding Powershell  Mimikatz attacks. One great resource is a post from adsecurity found HERE that provides an overview and defense recommendations. Microsoft also posted about Hacktool: Win32/Mimikatz HERE with remediation recommendations. Below is part of the adsecurity post. If you haven’t heard of this attack, you should read this.

It seems like many people on both sides of the fence, Red & Blue, aren’t familiar with most of Mimikatz’s capabilities, so I put together this information on all the available commands I could find. I plan to update as I can with additional content about the most useful commands. This way both Red & Blue teams better understand the full capability and are better able to secure the enterprises they are hired to protect.

I developed this reference after speaking with a lot of people, hired to both defend and attack networks, I learned that outside of a few of the mot frequently used Mimikatz commands, not many knew about the full capability of Mimikatz. This page details as best as possible what each command is, how it works, the rights required to run it, the parameters (required & optional), as well as screenshots and additional context (where possible). There are several I haven’t delved fully into, but expect to in the near future. While I will continue to post articles to ADSecurity.org about different aspects of Mimikatz usage, I plan to keep this as updated and as comprehensive as possible.

This information is provided to help organizations better understand Mimikatz capability and is not to be used for unlawful activity. Do NOT use Mimikatz on computers you don’t own or have been allowed/approved to. In other words, don’t pen-test/red-team systems with Mimikatz without a “get out of jail free card”.

This page and all content contained within is not to be reproduced in whole or part without express written consent by this page’s author.
I did not write Mimikatz and therefore have no special insight. All of the information on this page is derived from using Mimikatz, reading the source code, conversations with Benjamin, his blog & GitHub pages, and my own work/research.
Any errors on this page are my own only. Send comments/kudus here.

Many thanks to Benjamin Delpy for writing and continuously updating Mimikatz. His work has greatly improved the security of Windows, especially Windows 10.

Mimikatz is one of the best tools to gather credential data from Windows systems. In fact I consider Mimikatz to be the “Swiss army knife” (or multi-tool) of Windows credentials – that one tool that can do everything. Since the author of Mimikatz, Benjamin Delpy, is French most of the resources describing Mimikatz usage is in French, at least on his blog. The Mimikatz GitHub repository is in English and includes useful information on command usage.

Mimikatz is a Windows x32/x64 program coded in C by Benjamin Delpy (@gentilkiwi) in 2007 to learn more about Windows credentials (and as a Proof of Concept). There are two optional components that provide additional features, mimidrv (driver to interact with the Windows kernal) and mimilib (AppLocker bypass, Auth package/SSP, password filter, and sekurlsa for WinDBG). Mimikatz requires administrator or SYSTEM and often debug rights in order to perform certain actions and interact with the LSASS process (depending on the action requested). The Mimikatz.exe contains, or at least should contain, all capability noted there.

Mimikatz capability can be leveraged by compiling and running your own version, running the Mimikatz executable, leveraging the MetaSploit script, the official Invoke-Mimikatz PowerShell version, or one of the dozen of Mimikatz PowerShell variants (I happen to be partial to PowerShell Empire, because Empire is awesome!).

The Mimikatz source code and release binaries are available on GitHub and is licensed under Creative Commons with the following detail:
You are free to:
*  Share — copy and redistribute the material in any medium or format
*  Adapt — remix, transform, and build upon the material
*  for any purpose, even commercially.
The licensor cannot revoke these freedoms as long as you follow the license terms.
Attribution — You must give appropriate credit, provide a link to the license, and indicate if changes were made. You may do so in any reasonable manner, but not in any way that suggests the licensor endorses you or your use.
No additional restrictions — You may not apply legal terms or technological measures that legally restrict others from doing anything the license permits.

Mimikatz GitHub Wiki (Documentation, some of which is reproduced here)

GentilKiwi Blog (much of it is in French, use Chrome/other for translation)

After a user logs on, a variety of credentials are generated and stored in the Local Security Authority Subsystem Service, LSASS, process in memory. This is meant to facilitate single sign-on (SSO) ensuring a user isn’t prompted each time resource access is requested. The credential data may include Kerberos tickets, NTLM password hashes, LM password hashes (if the password is <15 characters, depending on Windows OS version and patch level), and even clear-text passwords (to support WDigest and SSP authentication among others. While you can prevent a Windows computer from creating the LM hash in the local computer SAM database (and the AD database), this doesn’t prevent the system from generating the LM hash in memory. By default, Windows Server 2008 and Windows Vista no longer generate LM hashes for users unless explicitly enabled. Starting with Windows 8.1 and Windows Server 2012 R2, the LM hash and “clear-text” password are no longer in memory. This functionality was also “back-ported” to earlier versions of Windows (Windows 7/8/2008R2/2012) in kb2871997, though in order to prevent the “clear-text” password from being placed in LSASS, the following registry key needs to be set to “0” (Digest Disabled):

This registry key is worth monitoring in your environment since an attacker may wish to set it to 1 to enable Digest password support which forces “clear-text” passwords to be placed in LSASS on any version of Windows from Windows 7/2008R2 up to Windows 10/2012R2. Windows 8.1/2012 R2 and newer do not have a “UseLogonCredential” DWORD value, so it would have to be created. The existence of this key on these systems may indicate a problem.

Note that running code directly on a target system is rarely desirable for an attacker, so Mimikatz is continuously updated with new capability to be run remotely. This include running Mimikatz remotely against a remote system to dump credentials, using Invoke-Mimikatz remotely with PowerShell Remoting, and DCSync, the latest feature to grab password data for any Active Directory account in the domain remotely against a DC without any Mimikatz code being run on the DC (it uses Microsoft’s Domain Controller official replication APIs, once the correct rights are attained).

Benjamin Delpy posted an Excel chart on OneDrive (shown below) that shows what type of credential data is available in memory (LSASS), including on Windows 8.1 and Windows 2012 R2 which have enhanced protection mechanisms reducing the amount and type of credentials kept in memory.

The majority of Mimikatz functionality is available in PowerSploit (PowerShell Post-Exploitation Framework) through the “Invoke-Mimikatz” PowerShell script (written by Joseph Bialek) which “leverages Mimikatz 2.0 and Invoke-ReflectivePEInjection to reflectively load Mimikatz completely in memory. This allows you to do things such as dump credentials without ever writing the Mimikatz binary to disk.” Note that the PowerSploit framework is now hosted in the “PowerShellMafia” GitHub repository.

What gives Invoke-Mimikatz its “magic” is the ability to reflectively load the Mimikatz DLL (embedded in the script) into memory. The Invoke-Mimikatz code can be downloaded from the Internet (or intranet server), and executed from memory without anything touching disk. Furthermore, if Invoke-Mimikatz is run with the appropriate rights and the target computer has PowerShell Remoting enabled, it can pull credentials from other systems, as well as execute the standard Mimikatz commands remotely, without files being dropped on the remote system.

Invoke-Mimikatz is not updated when Mimikatz is, though it can be (manually). One can swap out the DLL encoded elements (32bit & 64bit versions) with newer ones. Will Schroeder (@HarmJ0y) has information on updating the Mimikatz DLLs in Invoke-Mimikatz (it’s not a very complicated process). The PowerShell Empire version of Invoke-Mimikatz is usually kept up to date.

Defenders should expect that any functionality included in Mimikatz is available in Invoke-Mimikatz.

There are several ways to potentially detect Mimikatz use on a network, though none are guaranteed. Since Mimikatz’s source code is on GitHub, anyone with Visual Studio can compile their own version. I built my own version of Mimikatz called “kitikatz” by replacing all instances of “mimikatz” with “kitikatz” and the detection rate at VirusTotal was not good (4/54). Windows Defender on my Windows 10 system detected it.  I then replaced “Benjamin Delpy” and “gentilkiwi” with the same words, just replacing the e’s with 3’s and the i’s with 1’s. The detection rate was still poor (4/54). Windows Defender on my Windows 10 system did not detect it. So, your mileage will vary regarding detection. While VirusTotal is not the best method to determine AV detection, it is a relatively simple method to get some basic numbers.

The LSA, which includes the Local Security Authority Server Service (LSASS) process, validates users for local and remote sign-ins and enforces local security policies. The Windows 8.1 operating system provides additional protection for the LSA to prevent reading memory and code injection by non-protected processes. This provides added security for the credentials that the LSA stores and manages.

LSA Protection prevents non-protected processes from interacting with LSASS. Mimikatz can still bypass this with a driver (“!+”). 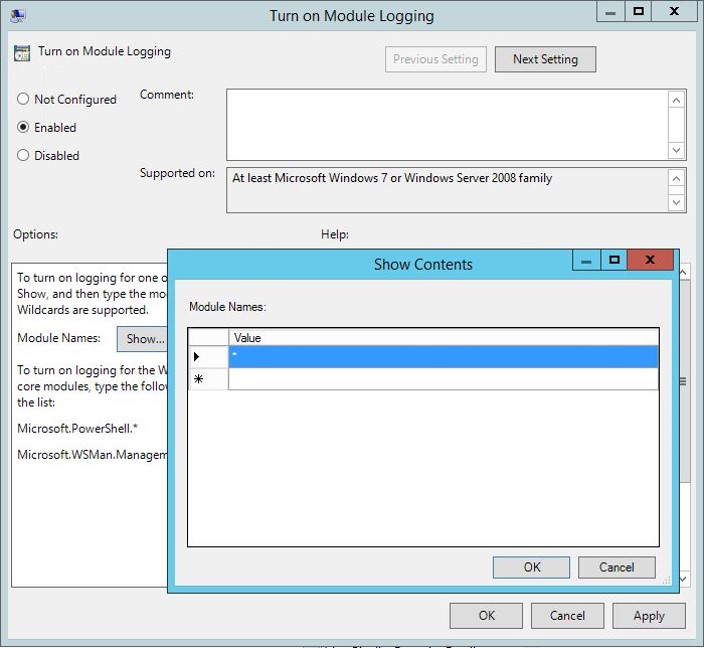 Note: While it may be possible to identify Mimikatz usage by alerting on “mimikatz”, “Delpy”, or “gentilkiwi”, a “sophisticated” attacker will likely roll their own version of Mimikatz or Invoke-Mimikatz without these keywords.

Many PowerShell offensive tools use the following calls which are logged in PowerShell Module Logging.

Here are just some of the most popular Mimikatz command and related functionality.