This blog is typically dedicated to security topics however I thought I would share about two cool gadgets I’ve been using to a live healthier lifestyle. Check them out and make 2013 a healthier year for you.

I love playing soccer but HATE running as a form of exercise. The problem I have is my mind concentrates on how uncomfortable I feel. I can run for miles on the soccer field but not around the neighborhood.

Zombies, Run! makes running fun. It’s an iPhone / Android app that puts you in the middle of a Zombie apocalypse. There are too many Zombies to shoot so “runners” like you have to go out and gather supplies without weapons. You start a mission and run like your normally would wearing headphones and listening to music. The app plays music off your mobile device playlist and periodically interrupts with radio transmissions from an operator updating you on your mission status. You also pick up virtual supplies while running to bring back to base. Your actual running route doesn’t matter however the distance and pace determines how you do. You can also use this app on a treadmill.

That’s all cool however the real fun is randomly Zombies will chase you. Zombies, Run! uses your GPS to track your speed and warns you to run faster as zombies approach. You start hearing Zombies moaning over your music as they get close which really makes you push yourself. The app will start beeping when Zombies are nearby and prompt you every mile about your pace. 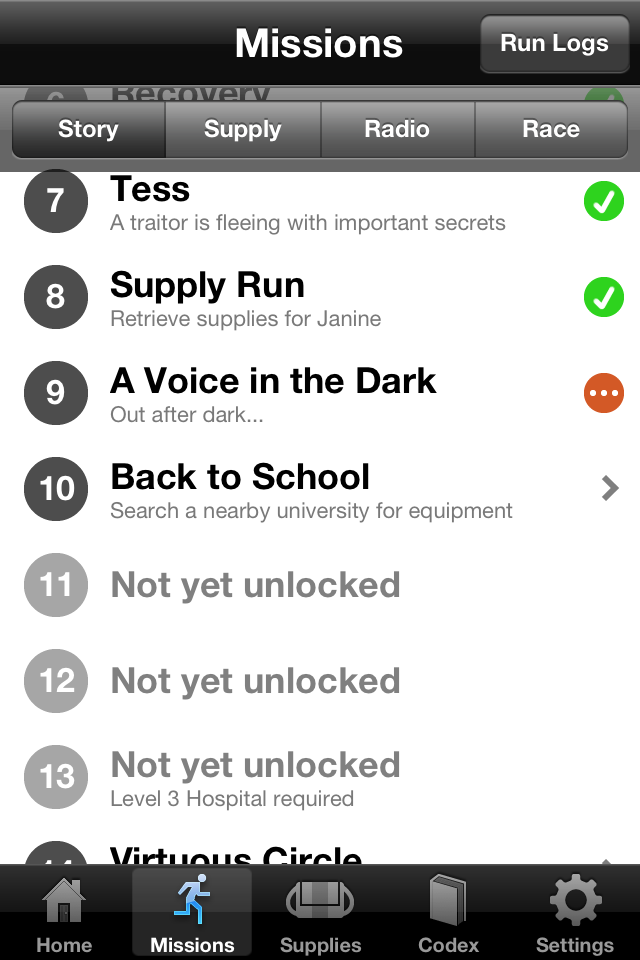 After your run, you have a virtual base to distribute supplies you picked up (similar to the Farmsville concept). As you run missions, you learn more about the story, unlock other side missions and build up your virtual town by upgrading buildings with supplies. Honestly, it makes me want to know more about the story and run more often. I find it funny that every so often I extend my run due to Zombies attacking while I’m almost home. My neighbors probably think I’m crazy when they see me break into a full sprint for no apparent reason.

My virtual town. The population goes up as I provide more supplies

The Recreation Center is level 2

My buddy Aamir Lakhani posted about the Jawbone UP so I’ll write about my experience (Jawbone UP overview found HERE). I found the UP helps me be aware of what I’m eating and inspires me to be active. The diet section offers a few ways to log what is consumed during the day. Personally, I just search for something close to the actual food and log it to get a general idea of my diet. If numbers show I’m 900% over a specific thing like cholesterol, most likely I should cut back.

The sleep section is cool reporting both light and deep sleep as well as how many times I wake up. So far I haven’t found any patterns between light and deep sleep however noticed I wake up around the same time during the night. My favorite sleep setting is the power nap function. I have to say the band is good about determining when to wake me up so I don’t go into a deep sleep. According to Jawbone, studies show people don’t feel energized if they nap too long.

The movement section is pretty good but doesn’t take into consideration the type of movement. You could carry a bag of bricks or walk to the bus stop and it counts as the same steps. So activities like lifting weights or sit-ups don’t count as much movement. I like how I can see my buddies numbers so they inspire me to move more if I’m off my feet for a long period of time.

All in all, cool gadget and worth the $129 dollars. The only functional issue I’ve had is I have rolled over the band in the middle of the night and triggered it as waking up which doesn’t record sleep data. Outside of that, it works as advertised.

One thought on “Two Cool Gadgets To Help Be Healthy This Year: Zombies, Run! Jawbone UP”