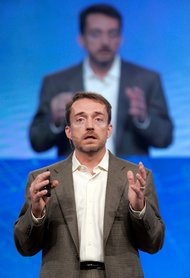 This was bound to happen. We saw Zenprise get picked up by Citrix. Many of expected Mobile Iron, Airwatch or Good to be next. William Alden from Dealbook gives us the skinny on the VMware purchased of mobile device security company AirWatch. The original post can be found HERE.

Looking to shift its software offerings, VMware has struck a $1.54 billion deal to bolster its mobile technology.

VMware said on Wednesday that it had agreed to buy AirWatch, a start-up based in Atlanta that makes mobile management and security software for businesses. VMware is paying about $1.18 billion in cash and $365 million in installment payments and assumed unvested equity.

The acquisition will be financed in part with about $1 billion of debt to be provided by EMC, the majority owner of VMware. The deal, subject to regulatory approval, has been approved by the boards of VMware and AirWatch and is expected to close by the end of March.

The announcement came as VMware, based in Palo Alto, Calif., released its preliminary results for the fourth quarter, saying it expected revenue of $1.48 billion, 15 percent higher than in the period a year earlier. VMware’s stock was up nearly 3 percent in trading before the market opened on Wednesday.

The company’s deal for AirWatch is its latest move to redefine its product portfolio in response to a changed technology landscape.

VMware, founded in 1998, pioneered the business of server virtualization, allowing one computer server to do the work of many. That helped usher in the era of cloud computing. But now, with many servers virtualized and rival companies offering new types of virtualization software, VMware is seeking new products to sell to its business customers.

“With this acquisition VMware will add a foundational element to our end-user computing portfolio that will enable our customers to turbocharge their mobile work force without compromising security,” Patrick P. Gelsinger, VMware’s chief executive, said in a statement.

With more companies allowing employees to use their own mobile devices, AirWatch makes software to manage mobile applications and data, including a security component. The company says it has more than 10,000 customers around the world and more than 1,600 employees.

VMware has been active as both a buyer and seller in recent years. In 2013, it completed a plan to sell assets as part of its broader shift in strategy.

“By joining a proven innovator like VMware, we now have an opportunity to bring our leading-edge solutions to an even broader set of customers and partners to help them optimize for the mobile-cloud world,” Alan Dabbiere, the co-founder and chairman of AirWatch, said in a statement.

The AirWatch team is expected to continue to report to the company’s chief executive, John Marshall, as part of VMware’s end-user computing group.