Wow so the FBI is basically stating they believe you should just pay if your computer is compromised by Ransomware. I personally would recommended to first understand which version of Ransomware you have since many versions are not using good encryption and can be decrypted (see a post on this HERE). You should also know that most Ransomware may give back your data however you probably will still have backdoors and other bad stuff on your system. The original post about the advice from the FBI’s bad advise can be found HERE from the business insider website.

If a hacker hijacks your computer with malware and holds your data for ransom, it’s probably best to just pay up, at least that’s the latest advice the FBI is giving out concerning ransomware.

Reported last week by Security Ledger, Joseph Bonavolonta, the Assistant Special Agent who oversees the FBI’s CYBER and Counterintelligence Program in Boston, spoke at the 2015 Cyber Security Summit and advised that companies infected with ransomware may want to give in to the criminal’s demands.

“The ransomware is that good,” Bonavolonta explained to an audience of business and technology leaders during the Q&A. “To be honest, we often advise people just to pay the ransom.”

Ransomware is a malicious software that takes over a victim’s hard drive when they click on an infected advertisement, email, attachment, or website and encrypts the contents of a device – and any other connected electronics – which the hacker then demands bitcoin or cryptocurrency payments to unlock.

The key to unencrypt data can cost victims anywhere from $200 and $10,000 and affects individuals and businesses alike. Even the police are not immune to the attacks. Cryptowall alone – currently the most prevalent malicious software used – made hackers over $18 million from April 2014 to June 2015.

“The amount of money made by these criminals is enormous and that’s because the overwhelming majority of institutions just pay the ransom,” Bonavolonta said. Adding that the Bureau and other’s efforts have yet to yield a solution.

A spokesperson from the Boston Bureau told Business Insider that while the FBI doesn’t make recommendations for what businesses should do if they fall vicitm, “instead, the Bureau explains what the options are for businesses that are affected and how it’s up to individual companies to decide for themselves the best way to proceed. That is, either revert to back up systems, contact a security professional, or pay.” 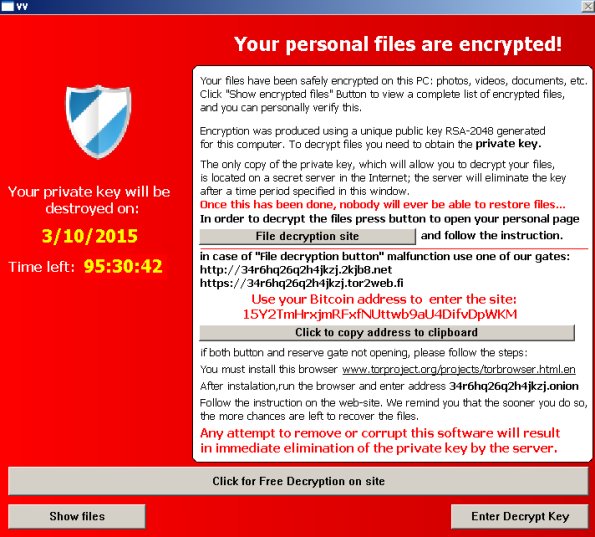 In an ironic twist, the large amount of people paying the ransom actually seems to be keeping the amount demanded low. And while supporting this sort-of ransomware economy may seem backwards, attackers appear maximize their profits through volume and most keep their word that you will “get your access back,” Bonavolonta said.

Not everyone would agree with Bonavolonta’s advice though.

In 2013, when Cryptolocker – the now disabled email phishing program – swept through computers in the UK, the National Crime Agency recommended businesses not give into malware authors and said it “would never endorse the payment of a ransom to criminals” adding “there is no guarantee that they would honour the payments in any event.”

While there may be disagreements over how to handle the growing cybersecurity problem, there are ways to keep scammers out.

The Internet Crime Complaint Center (IC3) division of the FBI recommended in a June public service announcement taking the following steps to keep hackers at bay:

IC3 additionally says if you believe you are a victim of ransomware to file a complaint your local FBI field office and suggests disconnecting from the internet to avoid any further data loss if you receive a message demanding payment.