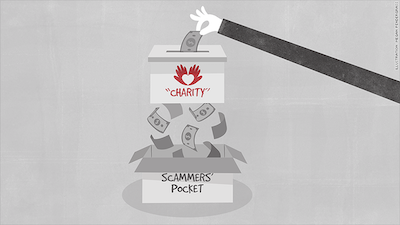 This is a friendly reminder that some cyber criminals will take advantage of a major event. This includes creating fake charities for the recent Hurricane Harvey disaster in Texas. CNN wrote a article on this concept. The original post can be found HERE.

People all over the country are donating to Harvey disaster relief efforts, but law enforcement officials and consumer watchdogs urge caution: Beware of phony charities.

The Justice Department’s National Center for Disaster Fraud (NCDF), which was established to crack down on scams following Hurricane Katrina, released a statement on Wednesday warning of post-Harvey charity fraud.

“Unfortunately, criminals can exploit disasters, such as Hurricane Harvey, for their own gain by sending fraudulent communications through email or social media and by creating phony websites designed to solicit contributions,” the statement said. Attorneys General in Colorado, Ohio and Arizona have also sent similar warnings.

After Hurricane Katrina struck in 2005, the FBI said more than 4,600 websites advertising relief efforts popped up, most of which law enforcement suspected were fraudulent. The Red Cross asked the FBI to investigate 15 sites that mirrored its own website in the days following Katrina.

One of the most brazen Katrina-related fraud cases Green recalled involved two men who registered a fake Salvation Army domain name — “salvationarmyonline.org” — and used it to collect nearly $50,000 in donations. Another man who claimed he was flying to Louisiana with medical supplies collected $40,000 in two days on “KatrinaAir.com,” according to a Justice Department spokesperson. He never arrived.

Are you considering a donation to a Harvey relief fund? Experts have some advice.

Steer clear of suspicious websites. Beware of unsolicited emails and phone calls. Never open emails purporting to show photos of disaster areas because they may be viruses hackers can use to steal your information.

And start by doing your homework on the organization.

“Be wary of charities that spring up too suddenly in response to current events and natural disasters,” the Federal Trade Commission website says. The FTC also urges close vetting of solicitations posted on places like Facebook and Twitter.

If you’re unsure about a charity’s history, the FTC has a handy list of sites to consult. Better Business Bureau’s Wise Giving Alliance, Charity Navigator, Charity Watch and GuideStar are among the leading charity watchdogs in the country.

The Justice Department suggests avoiding cash donations if possible. Pay by credit card or cut a check directly to the charity. Don’t ever write checks to individuals.

If you’re going to donate using a popular crowdfunding tool like GoFundMe, the group has set up a page dedicated to Harvey efforts. GoFundMe said it was coordinating with local and federal officials to prevent fraud.