Larry Dignan posted on zdnet about the recent FireEye purchase of Mandiant. The original post can be found HERE.

Why is this interesting? FireEye is known for identifying cyber threats using behavior based / virtual sandbox techniques at the perimeter of a network. Mandiant is known for endpoint security. The combination provides a perimeter and endpoint / host security story. Here is the article covering the acquisition highlights.

FireEye, a security outfit focused on thwarting cyber attacks, said it will acquire Mandiant, which monitors endpoints, in a deal valued at $1 billion. FireEye said the combined company will deliver 2014 revenue of $400 million to $410 million, up about 50 percent from 2013.

In a statement, FireEye said that the acquisition will broaden its addressable security market. The general idea is that FireEye can combine its virtual machine monitoring tools with Mandiant’s endpoint security, incident response and mediation. FireEye also said it will add sales people.

Mandiant’s most high profile gig was spotting and rooting out Chinese hackers from the New York Times.

Specifically, FireEye will issue 21.5 million shares and options worth about $900 million and pay $106.5 million in cash to acquire Mandiant. The exact price tag was $989.4 million.

FireEye and Mandiant are among the new breed of security companies focused on bringing security technologies that go well beyond antivirus and signature-based tools.

FireEye CEO David DeWalt noted that Mandiant is often the first call companies make after an attack. FireEye and Mandiant were already partners and the combined company will be able to offer everything from intelligence to endpoint monitoring to consulting services. DeWalt argued that Mandiant will put FireEye closer to incidents and bolster product cycles. 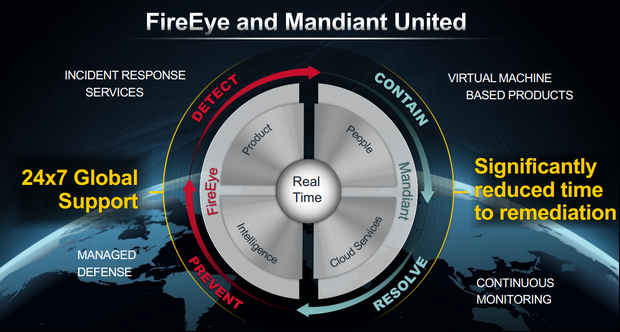 Based on the financial picture, FireEye and Mandiant should have a lot of cross selling opportunities, be able to expand internationally and improve products.