Nick Biasini, Earl Carter, Alex Chiu and Jaeson Schultz from the cisco security research team posted about the real impact of the recent announced ghost vulnerability found by Qualys. It seems to not be as scary as the market is advertising. The original post can be found HERE.

On Tuesday January 27, 2015, security researchers from Qualys published information concerning a 0-day vulnerability in the GNU C library. The vulnerability, known as “GHOST” (a.k.a. CVE-2015-0235), is a buffer overflow in the __nss_hostname_digits_dots() function. As a proof-of-concept, Qualys has detailed a remote exploit for the Exim mail server that bypasses all existing protections, and results in arbitrary command execution. Qualys intends to release the exploit as a Metasploit module.

GHOST Not as Scary as it Seems

There are a number of factors identified by Qualys which mollify the severity of this bug. First, in order for the vulnerability to be successfully exploited the application would need to accept hostnames as input, and resolve them using one of the deprecated gethostbyname() functions.  Additionally, there are restrictions on the hostname which can be used; The first character in the hostname must be a digit, the last character cannot be a dot (.), and the entire hostname may consist only of digits and dots(.).

Relatively few real-world applications will even accept this type of data as input; The examples of vulnerable applications cited by Qualys include the Exim mail server, procmail, pppd and others. Due to the nature of the vulnerability, generic detection for this vulnerability is not possible at this time. Detection must be deployed on an application-by-application basis. Talos continues to research additional programs that utilize the obsolete gethostbyname() functions, publishing supplemental rule coverage as necessary. 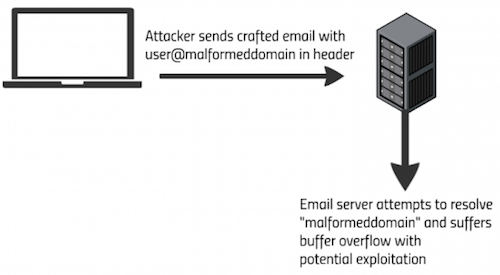 A patch remediating this vulnerability has been available since May 21, 2013.  However, the security implications of the bug were not immediately recognized at the time the patch was developed and incorporated into glibc. Red Hat, Debian, and many other mainstream Linux distributions have released patches for glibc that mitigate this vulnerability.  Linux users and administrators are strongly encouraged to patch affected systems to mitigate the potential risk.

Although this is a severe vulnerability that allows for a remote code execution, the threat of exploitation is relatively low due to the constraints required to get to the vulnerable strcpy command: Any program an attacker would exploit must utilize one of the deprecated gethostbyname() functions, and the malformed hostname passed to the function is required to consist exclusively of digits and only three dots or less.

The most likely outcome in a real-world scenario would be a segmentation fault, not code execution. Regardless, because of the possibility of exploitation, snort signatures have been created to detect any attempts to exploit overflows to the POC application (Exim mail server). Currently, Talos researchers have not seen the exploit in the wild but with the publication of a Metasploit module imminent, we expect that situation to change. 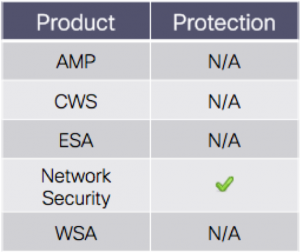 AMP, CWS, ESA, and WSA are not applicable for detecting attempts to exploit this vulnerability.

For those wondering how this vulnerability impacts Cisco products, see this source HERE.