Dailymail posted a detailed article on the Marcus Hutchins situation. For those that haven’t heard, Marcus, credited for assisting with preventing the WannCry virus was arrested last week by the FBI. Those details are found in the article originally found HERE. The article starts off with a bullet point summary for those that hate to read.

Hutchins appeared in the Las Vegas court on Thursday but the hearing was adjourned and he will appear again at 3pm today.

An indictment for his arrest was issued in Wisconsin on July 12 – around ten days before his arrest in Las Vegas.

Federal officers were able to see he entered the country by matching his name and date of birth with flight rosters and were waiting for him as arrived to fly home from Nevada.

Marcus’ supporters including his mother say Mr Hutchins, who is known online by the name MalwareTech, is innocent and claim a tweet from July 2014 proves he could not have written the software.

Some are using the hashtag #freemalwaretech and say he was arrested in America to avoid extradition proceedings in the UK.

His work to end the WannaCry ‘ransomware’ crisis embarrassed America’s own security services because they created it first but lost control and it was used by criminals to extort cash, friends say.

Andrew Mabbitt, a British digital security specialist who had been staying in Las Vegas with Hutchins, said he and his friends grew worried when they got ‘radio silence’ from Hutchins for hours.

The worries deepened when Hutchins’ mother called to tell him the young researcher hadn’t made his flight home.

He also says that they were staying together in the £5million mansion and Hutchins’ did not have to pay.

‘We don’t know the evidence the FBI has against him, however we do have some circumstantial evidence that he was involved in that community at the time,’ said computer security expert Rob Graham.

Jake Williams, a respected cybersecurity researcher, said he found it difficult to believe Hutchins is guilty. The two men have worked on various projects, including training material for higher education for which the Briton declined payment.

‘He’s a stand-up guy,’ Williams said in a text chat. ‘I can’t reconcile the charges with what I know about him.’

He added: ‘I don’t doubt that some of his code found it’s way into malware. He might have even helped criminals posing as researchers’.

Before his arrest Mr Hutchins had been in Las Vegas for Def Con, one of the largest hacking conventions in the world.

He had been ‘partying’ before his arrest and staying at a £1,950-a-night mansion worth £5million having rented it with seven friends.

The Airbnb five minutes from ‘The Strip’ has the largest private pool in all of Las Vegas and Mr Hutchins used his iPhone 7 to film himself swimming around it. 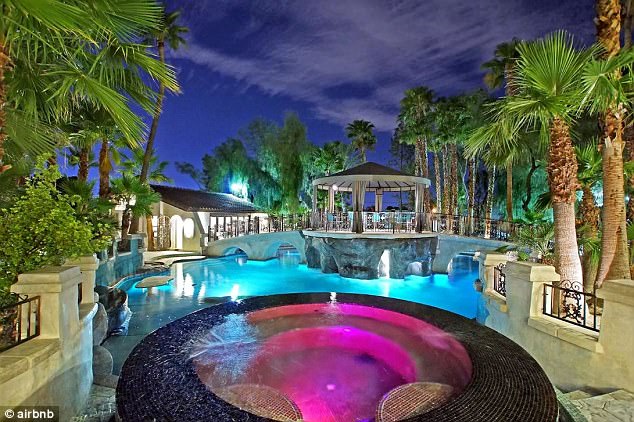 According to the website ‘it is the epitome of modern luxury real estate, offering all the amenities of a five-star luxury hotel with the privacy and security of a private estate.’

On the drive was Marcus rented bright orange Lamborghini Huracan LP610-4 Spyder, which cost at £200,000 to buy.

He posted a picture of the car online and wrote: ‘Is there any tracks or anything in Vegas where we can drive this car properly without being arrested?’ 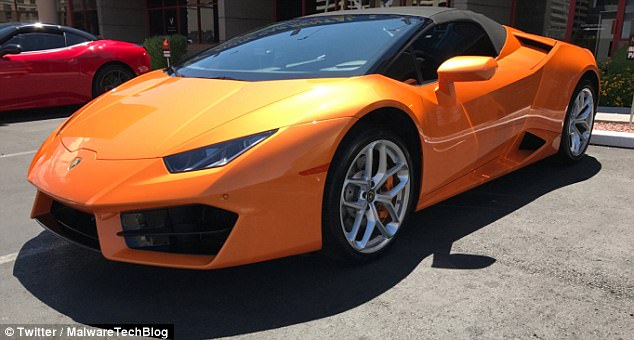 According to The Outline he wasn’t even planning to attend the the DEF CON hacking conference and instead partied at a nightclub where his wallet was stolen.

Other delegates asked him to pose for pictures calling him the ‘WannaCrySlayer’ and he also tweeted about getting drunk and eating lobster.

Describing one event he said: ‘They pick you up in a bus and take you to an undisclosed location with activities and loads of free food trucks’.

And in another message about visiting the Grand Canyon he said: ‘Apparently I can get a 5 person helicopter tour for $1600 and we get to land at the bottom of the canyon’.

The 23-year-old also went to a shooting range and fired a range of weapons including a number of machine guns, which he filmed.

Marcus stayed on in Vegas for a few days after the conference but was then stopped by the FBI in Virgin’s Upper Class lounger as he was about to board a flight back to the UK on Wednesday when he was arrested.

Hutchins discovered a ‘kill-switch’ for the virus after it paralysed thousands of NHS computers and claimed hundreds of thousands of victims around the world – including US courier service FedEx and German rail company Deutsche Bahn – in May.

His mother Janet Hutchins, said it was ‘hugely unlikely’ that her son was involved because he has spent ‘enormous amounts of time and even his free time’ combating such attacks.

She added that she is ‘outraged’ by the charges and has been ‘frantically calling America’ trying to contact her son from Devon.

According to tech website Motherboard, which broke the news of the arrest, an eight-page federal complaint was filed against Mr Hutchins on July 12 in a US District Court in Wisconsin.

It accuses him of being responsible for creating the Kronos banking Trojan, which was then sold online by an unnamed co-defendant.

The software is a malicious program that infects a computer if the user inadvertently clicks on an email attachment.

It then sits on the computer to monitor for banking passwords and personal information, which it sends to the hackers.

Mr Hutchins’ mother Janet said she was trying to find out what had happened to her son. She said: ‘I think I’m going to be rather busy tonight.’

Her son’s supporters said on social media that his activities could have been ‘white hat’ hacking in which hackers expose security flaws for good ends.

Mr Hutchins’ friend Andrew Mabbit said he was ‘in the Las Vegas FBI field office’ and appealed for lawyers to help him.

He said on Twitter that he refused to believe the charges. ‘He spent his career stopping malware, not writing it,’ said Mr Mabbit.

Hutchins was being held at the Henderson Detention Center after being arrested at Las Vagas’s McCarran International Airport but has since been moved to another facility, a friend told Motherboard.

The friend, who also works in the cyber security industry, was attending the Def Con event in the Nevada city with Hutchins.

He said: ‘He checked into his flight and I think he was sitting in the Virgin upper class lounge.

‘He was escorted out of the airport and never made his flight.’

The cyber community expressed their concern over his arrest with Naomi Colvin, from civil liberties campaign group Courage, praising him for his earlier work.

She said: ‘In May this year, WannaCry malware closed hospitals in the UK, becoming the first ransomware attack to represent an actual threat to life.

‘In halting the spread of WannaCry before the US woke up, MalwareTech did the world an enormous service – and to American businesses in particular.’

Ms Colvin said he had been detained for 24 hours before information was released about his arrest and said he has still not been allowed to contact his family or lawyers.

‘The US treats hackers far worse than other countries do, with much longer prison sentences, a dearth of vital health care and rampant solitary confinement,’ she said.

The anonymous friend added: ‘We still don’t know why Marcus has been arrested and now we have no idea where in the US he’s been taken to and we’re extremely concerned for his welfare.’

The National Crime Agency confirmed Hutchins had been detained but said ‘it is a matter for the authorities in the US’.

The Foreign Office said it is supporting Hutchins’ family and is in contact with authorities in Las Vegas.

Mr Hutchins was praised in May for stopping the WannaCry attack on the NHS. At its peak the virus attacked 47 health trusts, which were forced to delay operations and turn away patients.

It spread worldwide, affecting 300,000 computers in 150 countries. It froze screens, which the hackers then demanded up to £460 for users to get their unlocked data back.

Banks, government offices and power stations were also brought to their knees in what was described as the largest ransomware attack in history.

Mr Hutchins was arrested on the same day as more than £105,000 in digital currency Bitcoin paid by the victims of WannaCry was removed from the hackers’ online wallets.

It is not clear if there was any relationship between the withdrawal and Mr Hutchins’ arrest.

Hutchins, who works for Los Angeles-based firm Kryptos Logic, spent the weekend in May fighting off the ransomware attack – but stressed he is not a ‘hero’.

After his intervention he began working with the government’s National Cyber Security Centre to prevent a new strain of the malicious software emerging.

The security worker spent £8 registering the domain name the virus tried to connect with when it infected a new computer and pointed it at a ‘sinkhole server’ in Los Angeles.

It caused the malicious software to enact an ’emergency stop’, immediately halting its spread – but at first the cyber expert feared he had actually made the virus epidemic worse.

He said: ‘Essentially they relied on a domain not being registered and by registering it, we stopped their malware spreading.’

Speaking of the moment he stopped the virus, the anti-malware expert previously told MailOnline: ‘It should have been really nice but someone had made a mistake and told me that our registering of the domain actually caused the infection.

‘When I found out that it was actually the opposite it was more a relief.’