AlphaBay was recently taken down. ABC news posted about it HERE.

The US Justice Department has announced it has shut down the dark net marketplace AlphaBay, working with international partners to knock offline the site accused of allowing hundreds of thousands of people to buy and sell drugs, firearms, computer hacking tools and other illicit goods.

The action marked one of the largest law enforcement actions ever taken against criminals on the dark net, authorities said, striking a blow to the international drug trade that has increasingly moved online in recent years.

AlphaBay mysteriously went offline earlier this month. It was widely seen as the biggest and most popular online black market for illicit items, such as drugs, estimated to host daily transactions totalling hundreds of thousands of dollars.

The site allowed users to sell and buy opioids, including fentanyl and heroin, contributing to a rising drug epidemic in the United States, Attorney-General Jeff Sessions said.

“The dark net is not a place to hide,” Mr Sessions said at a news briefing in Washington, DC to announce the action.

“This is likely one of the most important criminal investigations of the year — taking down the largest dark net marketplace in history.”

IDs, credit cards, passports, weapons, and even Medicare card numbers, are amongst the many illicit items available on such markets.

The Justice Department said law enforcement partners in the Netherlands had also taken down Hansa Market, another dark web marketplace.

AlphaBay and Hansa Market were two of the top three criminal marketplaces on the dark web, Europol chief Rob Wainwright said at the press conference.

The operation included the arrest on July 5 of suspected AlphaBay founder Alexandre Cazes, a Canadian citizen arrested on behalf of the United States in Thailand.

Dozens of new marketplaces opened up immediately after its fall to fill the void — AlphaBay opened in December 2014.

After a dark net market goes offline, its users usually shift activities to a new marketplace and continue business as usual.

The most popular dark net market now active is known as Dream Market.

“The takedown of AlphaBay is significant, but it’s a bit of a whack-a-mole,” said Frank Cilluffo, director of the Centre for Cyber and Homeland Security at George Washington University.

“[Criminals] are going to flock to other places.” 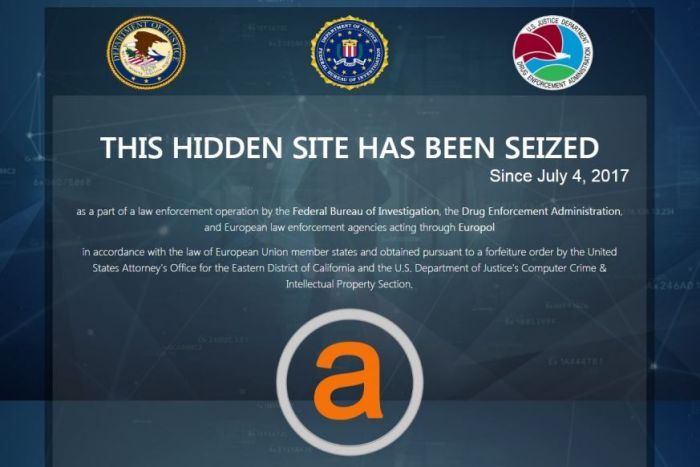